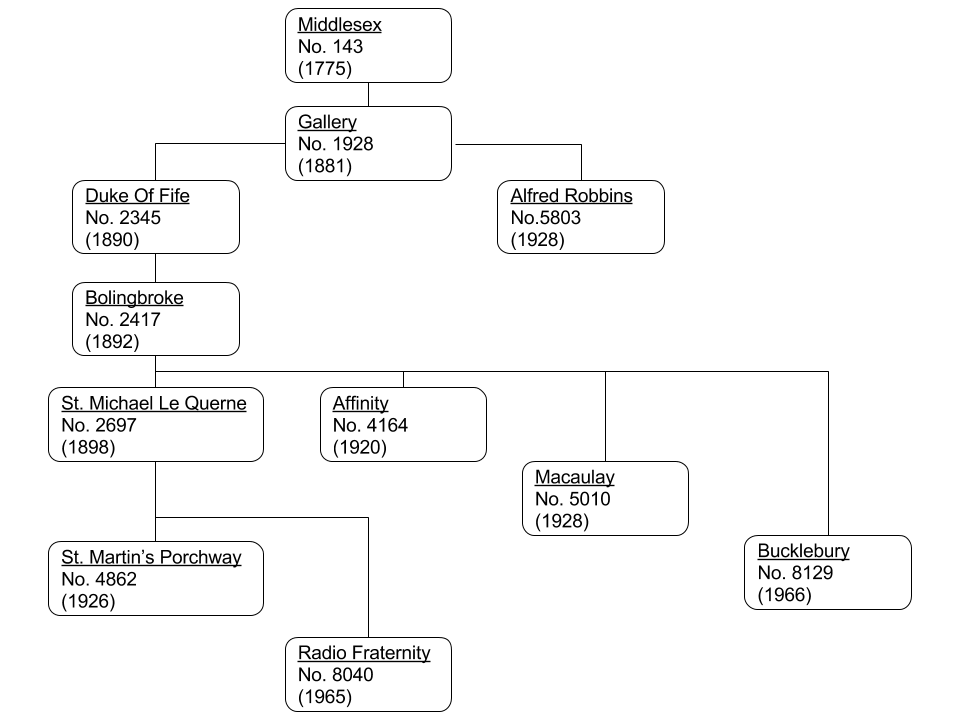 Middlesex Lodge was officially founded in 1775, however, the minutes of a meeting held in 1865 recording the Lodge's Centenary held in that year also the Lodge Banner refers to 1765 as the Centenary Year, would indicate that the Lodge had been meeting since 1765. The celebrations for the centenary were not carried out with the knowledge of Grand Lodge.

In 1770 Middlesex Lodge was one of five Lodges who set themselves up as an additional spurious body named Supreme Grand Lodge which lasted for five years, this action being taken because they were discontented with the Grand Lodges of the modern and Ancients.

The Lodge warrant was eventually granted under the Atholl (or ancient) Grand Lodge in October1775 the Lodge being numbered 194.

After United Grand Lodge was formed in 1813 the Lodge became No. 239 and in 1824 it assumed the name Middlesex. Renumbering took place in 1863 when it became No. 143. In 1881 Middlesex Lodge sponsored the petition for Gallery Lodge No. 1928. The Secretary of Middlesex Lodge was W. Bro. J. H. Mathews, President of the Board of Benevolence and was known to be a close friend of W. Bro. Sir J. B. Monckton, President of the Board of General Purposes, the Town Clerk of the City of London, who had advised the petitioners to approach Middlesex Lodge to act as a sponsor.

This Lodge was consecrated in 1881. It was founded by journalists at the House of Commons as the first Press Lodge in the Craft at that time.

An eminent member of the Lodge was R. W. Bro. Sir Alfred Robbins, President of the Board of General Purposes. His lifetime activity for the benefit of Free Masonry in general and Grand Lodge in particular is outstanding.

He was the inspiration and instigator of the Office of Almoner in the Craft. He established the Lodge Benevolent Fund in 1892 and in 1897 was made Almoner, there was no such Office in the Book of Constitutions, it was absolutely irregular, however, he was able to persuade Grand Lodge and a resolution he moved establishing the Office of Almoner was accepted.

In 1889, at the request of a number of Brethren living in Clapham and an unnamed Brother "in Chancery Lane" acting as an intermediary, Gallery Lodge sponsored the Duke of Fife Lodge No. 2345.

Gallery Lodge can record that in successive years Speakers of the House of Commons attended its Installation meetings. The date on which the Lodge was permitted to use the Royal Arms surmounted by a crown and the words "Imperial Parliament" on its Banner cannot be traced.

The close association with parliament is evident at every Lodge Meeting as the Gavel used by the W.M. is carved from a piece of charred oak recovered from the Chamber of the House of Commons by W. Bro. Guy Eden, after its destruction by enemy bombs in May 1941, and presented by him together with Rough and Perfect Ashlars which had been hewn from the foundation stones of the ruined Chamber.

In Nov. 1981 the Lodge's Centenary was celebrated at which time a new Banner was dedicated.

This Lodge was consecrated in April 1890 and comprised, initially, of Brethren living in the Clapham, South London Area.

A deep sense of honour and pride was felt by the petitioners and members of the Lodge Duke of Fife, Provincial Grand Master of Banffshire, Scotland, in allowing the use of his name and coat of arms, he also consented to be its first Honorary Member.

In 1897 a Lodge Benevolent Fund was proposed by W. Bro. Fockard, Secretary and established allowing 5% of the Annual Subscription to be transferred into said fund.

In 1919 a Duke of Fife Lodge of Instruction was introduced. In 1921 a very notable change to the Lodge By-Laws was made, this alleviated the surge in new candidates and states, "Not more than 5 Initiates in any one year whilst the number of members exceeds 100".

In 1931 the Lodge was awarded the Hall Stone Jewel and Colarette for participation in the building of the new Temple in memory of the Brethren who made the supreme sacrifice during the 1914/18 war.

Records show that in 1891 the Duke of Fife Lodge had the very great pleasure of sponsoring Bolingbroke Lodge No. 2417.

Bolinbroke Lodge was Consecrated in January 1892. Certain members of the Duke of Fife Lodge had a meeting with the W.M. and Commitee of that Lodge and it was resolved that the Duke of Fife Lodge would sponsor a new Lodge in Battersea, this being a heavily populated area without facilities for attending a Lodge.

A petition was forwarded to Grand Lodge in November 1891 and was granted.

The Consecration ceremony was held at Stanley Hall, Clapham Junction and was performed by V. W. B. F. A. Philbrick, QC, Grand Registrar, who had undertaken the duty at short notice due to the death of V. W. Bro. Col. Shadwell Clerke, Grand Secretary.

It is assumed that the name Bolingbroke was chosen by the founders because the Bolingbroke Hospital, School and Walk were all in the immediate area of where the new Lodge would meet, and an eminent statesman Viscount Henry St. John Bolingbroke was born in Battersea.

Records show thar Bro. C. S. Rogers and Bro. T. A. Collins were part of a commitee investigating the feasibility of forming a Lodge for Civil Servants in general and postal employees in particular.

In 1897 Bolingbroke Lodge sponsored the petition for St. Michael Le Querne Lodge No. 2697.

This Lodge was Consecrated in February 1898 and the ceremony was performed by the V. W. Bro. E. Letchworth PGD, Grand Secretary. Although not recorded, it is firmly believed that the founder members were employees of the Post Office.

The name "Le Querne" of Corn is taken from a church that was situated at the extreme western end of Cheapside, were the City's Great Corn Market was located. The church, St. Michael Le Querne, was destroyed during the Great Fire of London and was never rebuilt, however, its position is indicated by a blue stone marker. The Lodge based its By-Laws on those of the Bolingbroke Lodge.

By 1903 the membership had risen to 84 and during that year 24 Brethren were Initiated also a Lodge of Instruction was established. By 1913 the total membership was 148. During the 1914/18 First World War 43 Brethren served in the Armed Forces and only 1 lost his life thi being Bro. H. E. Manser, Sergeant, 8th. City of London Regiment (Post Office Rifles). The Lodge meeting on 15th July 1944 was cancelled due to heavy bombing of London.

The record shows that 9 Brethren were serving in the armed forces during the Second World War. In 1965 the Lodge supported a petition for the formation of a new Lodge in London to be known as the Radio Fraternity Lodge. In 1983 an account called "The 1998 Centenary Account" was opened in preparation for the Lodge's Centenary celebrations.

In 1997 a presentation of a Bronze Medallion from the new Samaritan Appeal Fund was made to the Lodge.

A bequest in the will of W. Bro. H. Page for a sum of money, to be used for the purchase of wine at future Festive Boards, was received with gratitude. In the year 1998 the Lodge's Centenary was celebrated.

For information on Radio Fraternity Lodge see the about section.